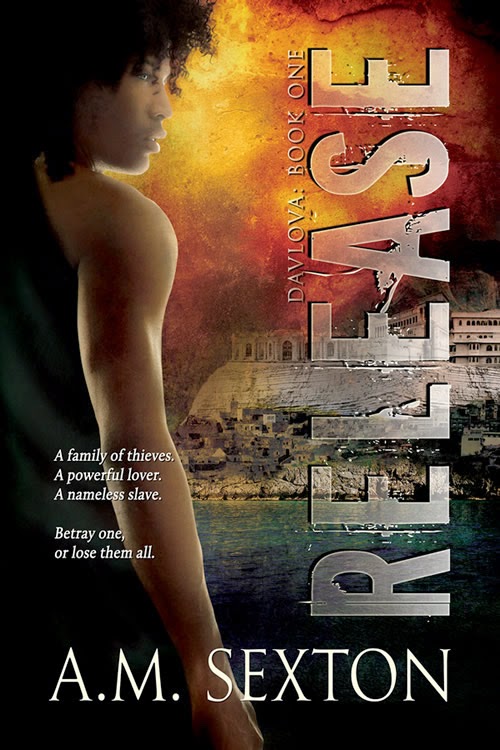 
Blurb: Davlova: a poverty-ridden city-state ruled by a tyrannical upper class. Resources are scarce and technology is illegal. But in the slums, revolution is brewing.
Misha is a common pickpocket until his boss gives him a new job. Disguised as a whore, Misha is sent to work for one of the most powerful men in the city. But his real task is far more dangerous: get close to Miguel Donato, and find something – anything – that will help topple Davlova’s corrupt government.

Misha is plunged into the decadent world of the upper class, where slaves are common and even the most perverse pleasure can be found. Although he’s sure Davlova’s elite is involved in something horrific, proof is hard to come by, and Misha begins to fall in love with the man he’s supposed to betray. Then Misha meets Ayo – a sex slave forced by the neural implant in his brain to take pleasure from pain – and everything changes. As the lower class pushes toward a bloody revolution, Misha will find himself caught between his surprising feelings for Donato, his obligations to his clan, and his determination to save Ayo.

Warning: This book contains graphic descriptions of violent sexual acts of questionable consent that may be disturbing to some readers.

Review: Some weeks ago, Marie Sexton announced on Facebook and on the social networks, that her new book would be released soon. That this book was self-published and that she had even decided to use another pseudonym, not too much different from the original one, actually, but that nevertheless must send a message to her readers and fans: this book is different from all the others she wrote. We can’t call it a romance, actually. Or maybe we can use the word “romance” but only partially. Release is so much more than a “simple” romance. However, let's slow down, I have a lot to tell you.
Let's start from the title: Release. This word has a lot of meanings. We will find it many times during the story and each time it will have similar and at the same time different meanings, because the situations in which it will be mentioned will be different. This book is a string of events that hit me hard, a build-up of emotions, facts, and tension which, in different chapters, with different characters, exploded and made me feel, as a reader, a very deep empathy with the main characters, made me sigh, feeling “released” with them.

Another important thing I want to talk about is: violence.

As you can read in the warnings above, just after the blurb, this book contains scenes of violence. Even sexual violence. Sometimes I had to squint to continue reading, sometimes I swore because what I was reading was cruel, brutal. And nevertheless real. Violence plays an important role in this novel. The characters have to face it under many aspects. Above all the physical and sexual violence, but also the psychological one. If I think about Ayo, my heart feels squeezed. But it's not only about him, almost every character has a past of violence, someone physical violence, someone moral (I'm thinking about Frey), someone “passive” violence (to force someone to sacrifice himself it's violence, in my opinion). Nobody, in this novel, is “clean” of violence. Everyone has positive sides, but also negative ones. Everybody has kind thoughts, but also bad thoughts. And they behave accordingly.

The characters created by Marie Sexton (I will continue to call her like this, because I understand her decision, but I want to show that for me there’s no difference and I even think that this is her best book among the ones I read. And I read Release maybe just because it was Marie who wrote it, maybe if I hadn't read her Coda Series or Between Sinners and Saints, I wouldn't have read Release and I would have lost a wonderful book). However... I was saying:
The characters created by Marie Sexton are so realistic that I never once felt thrown out of the story. No, I was Misha, I was Anzhéla, I was Talia, Lalo, Jenken, Frey. Maybe, about at the end, I was even Donato. Yes. Because he is realistic, too. No, he is the most realistic, he and Misha and their relationship between love and hate.
Anzhéla is a very present character, she is often not there in “person”, but in her proteges’ thoughts. In the thoughts of all those boys and girls, those kids she saved from the streets of Davlova, and let in her theater, a den of thieves out of necessity. Anzhéla's den is not the only one. There are many others, and the guardians of all those kids have saved their lives, in a way or another.

"Finally, a small boy crept from the shadows, tears making bright clean tracks down his dirty cheeks. He sank to his knees between the bodies. His shoulders shook visibly. Whether they'd been kind, like Anzhéla, or cruel, like Frederic, they'd been his guardians. They'd given him a roof and fed him. They'd provided a family and a home. They'd done what nobody else in the city had bothered to do." 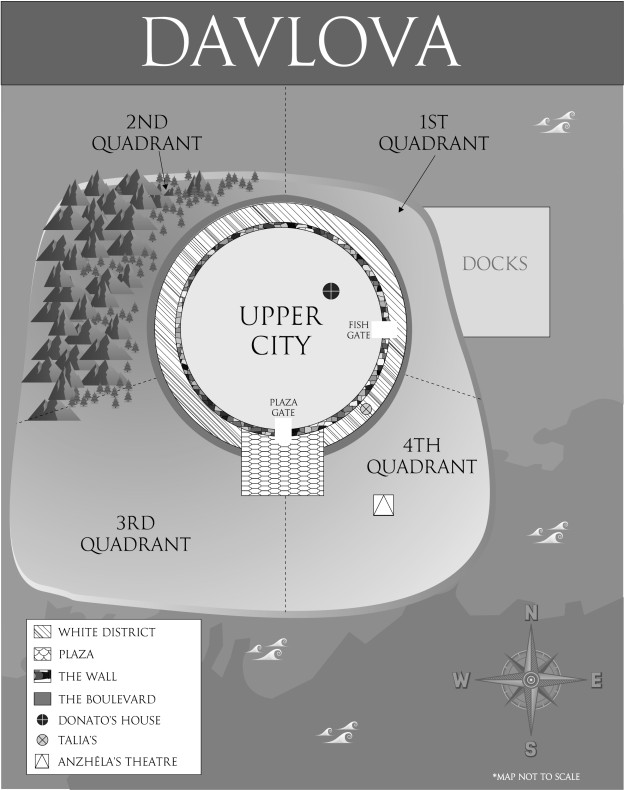 I told you how realistic this novel is. Now, I tell you that it's a science-fiction novel, that there is a factory called Dollhouse, that there is also a very dangerous and very strong aphrodisiac drug. I tell you that the world is divided in rich people, the “pureborn”, and in poor people, those who live in the trenches, doomed to fight to survive. And in the middle, there are the merchants, those who live in the White District, that surrounds the hill. I tell you that technology is forbidden, that the quadrant on the outside of the Wall doesn't have electricity, while on the hill the pureborn live in a vicious, decadent way. I tell you that there are goddess temples and that in the streets of Davlova revolution is taking its path.


I followed the avenue counterclockwise, east and north as it curved up through the slums that were the fourth quadrant—the slums where I’d grown up—and finally bled into the first quadrant, which held the harbor. Very few people lived in this sector. It was all about commerce
and access to the sea.

I tell you all these things and I add: there is so much more!
There will be a second volume of Davlova: Return (Davlova #2 – Conclusion).
Some things of the book one will become clear only in the second book.

I can't end this review without mentioning the hot sex scenes. They are never vulgar, but Marie Sexton managed to make them really exciting.
I leave you with another quote. And with an advice: read this book.

"No matter how much I hate him, the programming is stronger. My body betrays me."

"I want to help", I said weakly.
He looked up at me, his eyes suddenly sharp and intense with hope.
"Will you kill me?"
I instinctively stepped backward. "What? No!"
"Please?"
"Tell me you don't mean that."
His shoulder fell. He slumped in defeat. "I can't do it myself. The programming won't let me."
"I don't want to hurt you." I stepped closer again and reached out to touch his arm. He didn't respond to my touch, but he didn't pull away either. "I don't want to be like him."

He laughed. There wasn't much humor in the sound, but he attempted to smile at me. The fragile sincerity of it made me ache. "You're nothing like him."

And now, finally, it's with a great pleasure that I'm here to announce that this novel, which I appreciated a lot, will be published by Triskell Edizioni! I had the honor to read it, and then I've discussed with Barbara about a possible translation and release of the Italian version with Triskell Edizioni. I thank Barbara for the trust she places in me, and I hope I won't let her down ever, but when I read Release I thought it was a shame that Italian readers couldn't read it! Something must be done!
And so here I am to announce the translation of this novel by Triskell Edizioni! Isn't it a beautiful thing?